I hope everyone enjoyed yesterday as much as I did. You can never go wrong with hanging out with friends and grilling "the world" (as Brad put it). Delilah was able to enjoy some fresh air with some much needed 'outdoor' play time. We put down a blanket and some toys for her to play, but instead she wanted to explore the grass. After her dinner of a hotdog, potato salad and fresh peas, we lit some sparklers. I thought I was being the cool mom by getting the 'extreme' sparklers instead of the traditional ones. We found out quick that the 'extreme' stood for extreme smoke and extreme flame. Lesson learned. Must stick with tradition! I'm not sure that Delilah really cared for the sparklers. She seemed more eager to play with my earrings. I still managed to get some pics. 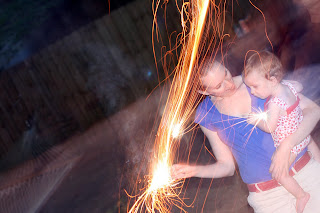 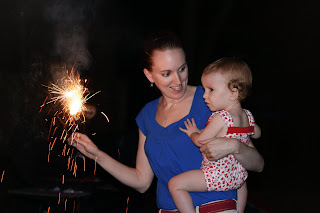 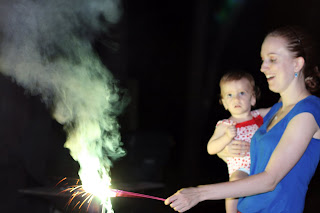 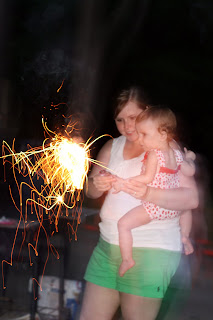 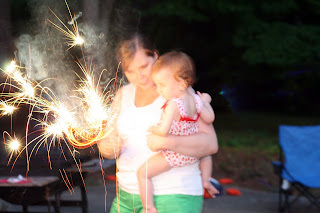 After Delilah went to bed, we stayed up talking and playing Cornhole. For those of you not familiar with this game, it is essentially a bean bag toss game. Sounds lame, but it is a TON of fun! (Google it if you want to know more, they have an Association.) Around 11 we had a new visitor join our little group. A cute, black kitten stuck her head up out of the Cornhole game. Shocked us all. She was obviously a stray, so we picked her up and started checking her out. About this same time Johnny called. I told him about the kitten and he said to take it home. So, without further ado, I am pleased to introduce you to Mango, the newest addition to our family. 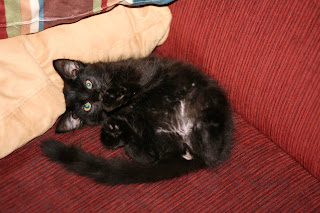 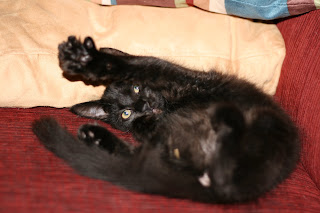 I know what most of you are probably thinking, "Another animal?!?!". We must be masochists, but how can you not look at that face and turn into goo. Bonus: cats kill bugs, something that I am too scared to do. I'm a wimp. If you are curious about the name Mango, it is mainly due to her eye color. You see, Jenn and Brad already have a cat name Kiwi, and Bobert thought it would cool for them to have another with another fruit name. So he named her Mango after her orange-ish eyes. However, there was NO WAY Brad was going to allow another cat in the house, so that is how we ended up with her. And Johnny being a sucker for kittens! So far she is super sweet and the dogs get along with her. We will be going to the vet before she gets to spend too much time around Delilah, but Delilah is already in love with her. She tries to chase her around the living room. Hopefully they will grow up together as buddies. Anyhow, hope everyone who is off today is enjoying it. Rest up!
Posted by Kera at 5:25 PM