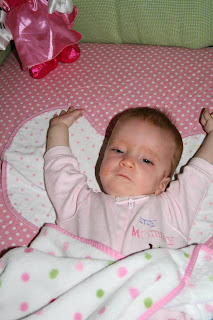 **A bit off topic, but I have begun planning her 1st birthday party. Yes, I know I have three months, but I will need every bit of that time to pull it all together. I also know that she is only gonna be 1 and she won't remember the party, but I will. Let's be honest, this party is as much for me as it is for her, and turning 1 is a huge deal! I have always dreamed of having a little girl and the fun stuff I will get to do for and with her. This is just the first of many crazy, over the top celebrations we will have for this beautiful miracle in my life. Luckily, I am pretty thrifty and crafty, so most of the decorations will be cheap (something my husband will be thankful for). Ok, really going to bed now. Good night.
Posted by Kera at 10:39 PM